Storz and Bickel are among the most respected and popular brands in the vaporization industry – and for good reason. They are OG’s when it comes to vaping, as they debuted their original Classic Volcano desktop vaporizer way back in 2000 and now the latest version of the Volcano Hybrid in 2019. The premium brand doesn’t release devices very often, so when they do, it’s a pretty big deal.

Desktop vaporizers have kind of been fading in popularity as of recent years, but they could make a comeback if the Volcano Hybrid vaporizer gains notoriety with its improved features, Bluetooth connectivity, and a detachable power cord. Is this new desktop device worth the hype and the steep price tag? Let’s get into our Volcano Hybrid review and you can decide for yourself!

A Brief Background on Storz and Bickel:

The analog desktop device that Storz and Bickel released back in 2000 is now referred to as the Volcano Classic, and they only released 4 other vaporizers since then. Storz and Bickel updated the Volcano with digital controls in 2007, calling that model the Digit. They released the Plenty in 2008, which is technically portable but should be mainly used at home. The Mighty and the Crafty portable vaporizers were released in 2014, and they both have been highly successful, becoming household names.

How to Use Volcano Hybrid:

The Volcano Hybrid 2019 features an innovative user control interface that is truly unique and top-shelf. Unlike the older Volcano models, there are no switches or knobs on the Hybrid, because it’s operated entirely via the touch screen. While the controls are certainly user-friendly, there could be a slight learning curve – especially if you’ve never used a desktop vaporizer. It’s pretty easy to understand after the first few sessions, though.

Operating the Volcano really hasn’t changed much in 19 years, despite its new and updated look and functionality. The heat button obviously starts heating up the device, and the air button delivers vapor into either your balloon or whip. Using the Bluetooth connectivity, the Volcano Hybrid vaporizer can be operated with a Smartphone app much like the Crafty+ (Plus) vaporizer, also from Storz and Bickel.

While the iOS app for the Crafty+ and Volcano Hybrid is still unavailable after Apples ban of vaping-related app from the App Store, Storz & Bickel has recently announced their website application which can control the devices Bluetooth functionality!

You can also use the “Bluenet” app as a way to also access the Storz & Bickel app page found here: Web App. This web app will function for the Crafty, Crafty+, and Volcano Hybrid vaporizers.

Desktop vaporizers can be used with either balloons or tubes, but the Hybrid now has the option to vape with both – thus the name. You can also use the Volcano Hybrid vaporizer as an aromatherapy device if you so choose, vaping plant material such as lavender for a pleasant smell.

The Volcano Hybrid from Storz and Bickel has a huge range of precision temperature flexibility, from 40°C all the way up to 230°C. The Volcano Classic vaporizer took a full three minutes to heat up, but the Volcano Hybrid 2019 is ready to rip in about 90 seconds. This demonstrates how far we’ve come and the awesome innovations we’ve had the pleasure of seeing in the vaporizer industry. There’s really no “sweet spot” as far as what is the best temperature at which to vape with the Hybrid – it’s all up to you and the size of hits you like to take.

The heating system on the Volcano Hybrid vaporizer is, you guessed it, a hybrid, using both convection and conduction. The Hybrid features innovative new heating technology called double helix, which delivers a unique vape experience. The conduction heating is necessary due to the addition of its functionality with tubes. There are some accessories from previous Volcano models that are compatible with the hybrid, but you’ll need a new filling chamber and reducer (to use with dosing caps) due to its redesign. You can pack as little or as much as you want with the Hybrid, about as much as a gram or two, or you can microdose with the dosing caps.

The Volcano Hybrid a device that is designed with the true desktop vape connoisseur in mind. The flavor quality and smoothness is unmatched, and might even be better than the Volcano Classic and the Digit. You can also vape your favorite concentrates with the Hybrid using the drip pad, but we think its dry herb hits are a bit better.

What can we really say about the reinvented classic Volcano that hasn’t already been said? It looks as sexy as it ever has! It’s got basically the exact same measurements as the original one did at the turn of the century, and that’s 8 X 7. It still weighs about 6 pounds. The silver steel and black base haven’t changed much, either – and why should they change? If something isn’t broken, there’s no need to fix it.

What Comes With the Volcano Hybrid 2019?

The Hybrid comes with a truckload of accessories. These include three valve bags that have mouthpieces, one valve bag that has an adapter, a tube system, a filling chamber, a cap ring a concentrate drip pad, a detachable power cord, an air filter, an herb mill, and a cleaning brush. Dosing caps, reducers, and extra filling sets are sold separately from the Storz and Bickel website.

How to Clean the Hybrid:

There are a ton of accessories that come with the Volcano Hybrid vaporizer, so obviously it will require more cleaning and upkeep than your typical portable vaporizer. You’re going to need to take extra care with certain delicate components, and we recommend giving the tube and balloon mouthpieces a cleaning with cotton swabs dipped in isopropyl alcohol after every two sessions or so. The good news is that Storz and Bickel tend to design their devices to last, as long as you take good care of them. Purchasing a cleaning kit like the Zeus Purify can help out a lot with this.

In most of our other reviews, we include sections on battery life, as well as portability and discreetness. Since the Volcano Hybrid Vaporizer is strictly a desktop vaporizer, it plugs into an electrical outlet, and obviously isn’t discreet.

The Volcano Hybrid is very expensive and complicated to use, so it’s not going to be for newbies. However, it would be a great investment for business owners such as dispensaries and caregivers offering free samples, or growers and seed companies doing live events.

Like the other units from the Storz and Bickel brands, the Volcano Hybrid is so unique, it’s in a class of its own. For this reason, there’s not much to compare it to – except, of course, its own siblings like the Plenty and the other versions of the Volcano. If you want a more affordable desktop vaporizer, maybe check out the Extreme-Q. You will sacrifice vapor quality, features, and accessories, but you will pay a lot less for a desktop vaporizer.

What do you think about our Volcano Hybrid review? The device is brand new, so if you have any input about something we overlooked, we want to hear from you! 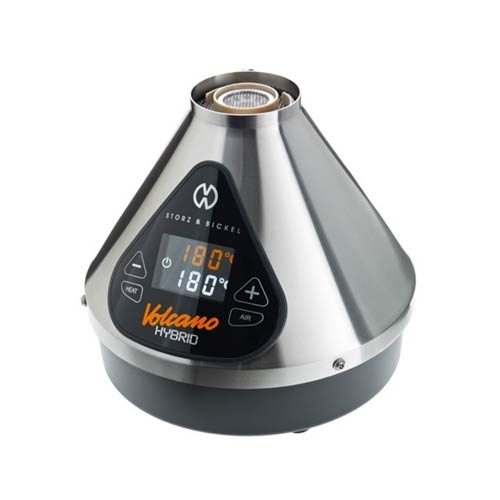 The XVape Vista Mini is technically a desktop vaporizer that features a slick design and promises...

Desktop vaporizers have been kind of phasing out of the vaporizer market within the last few years,...

The Focus V Carta V2 is an electronic dab rig that is mostly meant for use with concentrates, but...

The Puffco Peak is a dab rig that doesn’t require any kind of nails or blowtorches, both of which...

The Dr. Dabber brand is well known for their popular, high quality units like the Dr. Dabber Boost....
Scroll to top