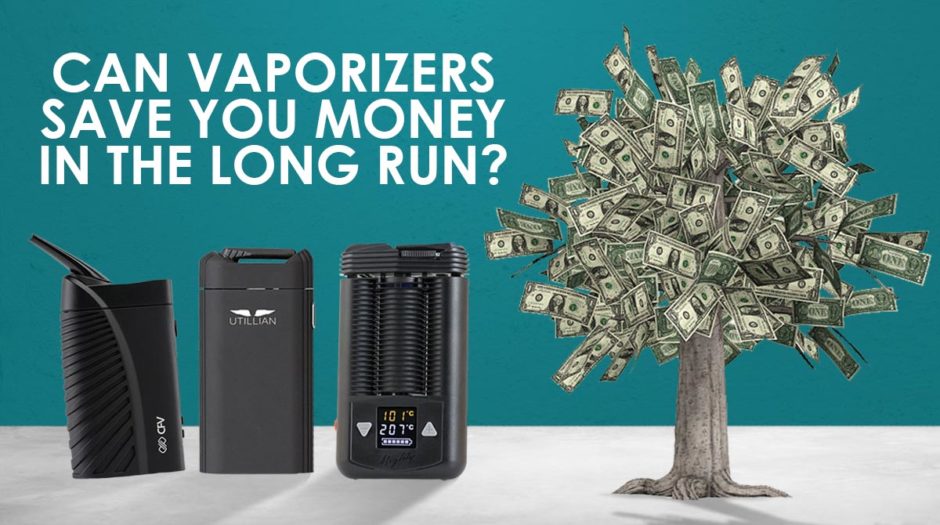 Can Vaporizers Save You Money in the Long Run?!

By now, most vape enthusiasts – both that of cannabis and tobacco products alike – understand that vaping is far better alternative than smoking. While the scientific evidence of the effects of vaping nicotine and propylene glycol is still not completely settled, it is well accepted that vaping nicotine is a better option than combusting and inhaling tobacco smoke. But can vaping cannabis or tobacco products save you money in the long run? Keep on reading as we explore this question, and make your mind up for yourself.

Vaporizing on the Rise

Ingesting cannabis, in general, has been proven to cause far fewer problems than that of tobacco, even smoking cannabis. There are few, if any, cases of patients dying from cancer who smoked cannabis and nothing else. Up until about the early 2000’s, most cannabis smokers also smoked tobacco products, so this was hard to quantify. Along with the widespread popularity of modern day vaporizer and the legalization and decriminalization of cannabis in parts of the U.S. and Canada though, it seems there has been a steady decline in smoking tobacco.

There is little evidence to suggest that there is a decrease in cannabis smoking due to increased vaporization. Unfortunately, the main reason for this is because cannabis is still illegal at the federal level in the U.S. Because the plant was recently legalized throughout Canada though, there should be some figures on this available soon – at least along the lines of how much cannabis flower is sold compared to that of oil cartridges or wax. Hopefully, there will be some polls done as well to indicate how many Canadians prefer vaping flower over consuming it out of a pipe or bong.

The question marks surrounding the vaporization of cannabis and the costs associated aside, one thing is for certain – vaping nicotine, the active ingredient in tobacco, is much less expensive. In the U.S., a pack of cigarettes in the majority of states costs between $6 and $8. Cigarettes cost the most in the state of New York, costing $14. Tobacco is taxed a lot more heavily in Canada, and a pack of cigarettes in the great white north will set you back anywhere from $10 CAD all the way up to as much as $17 in some provinces. If you smoke a pack a day, you’re spending at least $3650 a year on cigarettes as a Canadian and $2,190 a year on cigarettes as an American.

Compared those astronomical cigarette prices to that of e-juice, and it’s clear that vaping is not only better health alternative; it’s also better for your wallet. A typical vape for use strictly with nicotine e-juice can be as inexpensive as $30 CAD. Even the heaviest of former cigarette smokers can more than likely get by with spending $25 CAD on e-juice per week, sometimes even longer than that. So when you do the math, you’re likely saving well over $2,000 CAD just switching from smoking cigarettes to vaping e-liquids. And this isn’t even beginning to mention the potential health benefits and the increased life span that comes along with quitting combustion. It doesn’t take an economist or a doctor to draw the obvious conclusion that vaping nicotine is a healthier choice for your body and for your finances.

As we previously mentioned, there isn’t even close to as much cut and dry evidence for vaping cannabis flower or concentrates as there is for that of tobacco. The numbers are next to impossible to quantify, especially due to the fact that no sales records are kept on transactions on the black market. Again, this should hopefully change along with Canada’s nationwide adoption of legalization, so we should get a better picture of these numbers in the near future.

Let’s just imagine a hypothetical scenario, though. Say for example, you would smoke a half-gram of flower to feel nicely medicated. Most users would likely tell you that they can achieve a similar desired effect or possibly even a more pure feeling from vaping half of that amount. The reason for this is the same reason that vaping dry cannabis herbs tastes and smells much better than that of combustion – and that is because of the natural, active ingredients are much better released when you vape compared to when you smoke. The same is true for the feeling. You will still feel the effects when you smoke, obviously, but you need a lot less flower when you vape. So to answer the question, yes, vaping flower can and does save you money compared to that of smoking.

And we haven’t even touched on vaping concentrates. A hit of wax or oil or a dab can get you just as high as an entire pipe of flower. And a gram of concentrate can last you twice as long as that of flower, especially if you are thrifty or don’t consume all that often. So in conclusion, we think it is safe to say that vaping anything will not only save your health, but it can and does save most people money in the long run.

What do you think? Are we right to think that vaping cannabis and/ or tobacco products will save you money in the long run? Or is there something we are missing? Let us know in the comments section. We always love hearing what you have to say.

So, you’ve got yourself a shiny new Dynavap or eyeing one up? Then, you’re probably wondering...

Is a Dynavap induction heater worth it?

Maybe you’ve seen the rave and crazy about induction heaters for Dynavap vapes and you ask to...

We love our Dynavap as much as you do, and figured we’d let you in on the secrets and best custom...

So, you’ve had the pleasure of having a Storz & Bickel vape end up in your life, and now...

What Is a Bubbler and How Do You Use One?

Bubblers are one of the most popular vaporizer accessories out there, but what is it exactly? A...

What’s the best weed grinder around?

So you want to get a grinder which is a bit better than your generic $10 grinder with a pot leaf on...
Scroll to top